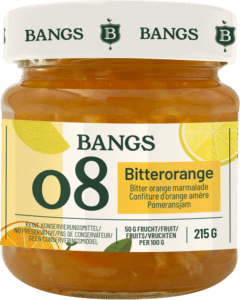 It’s not sweet and it’s not bitter, rather it hits that perfect note right in between. Made from Spanish bitter oranges, this marmalade is one of the Bangs’ owners’ favorites and once you get a taste of it, you’ll understand why. In fact, we’re pretty sure it’s going to become your new favorite too.

Bitter oranges are no fun to eat raw on their own. However, the very thing that makes them almost inedible, their powerful, bitter orange flavor, is exactly what makes them great in a marmalade. Bangs’ bitter orange marmalade has an intense orange flavor but is, as the name suggests, more bitter, which makes this marmalade an excellent choice on darker bread, in marinades or with fish. Or, if you’re feeling adventurous, try them on gingerbread and thank us later!

Bitter oranges, or Seville oranges as they’re sometimes called, have a dark orange, almost reddish color and a thick, rough peel. Their appearance is reminiscent of oranges, but they have a spicier, stronger aroma. The flesh is lighter, more yellow than orange, and heavy with seeds.

Unlike oranges, they’re not sweet at all in their natural state. But boiled with a bit of sugar, and mixed with sweet orange and lemon pulp, they create the perfect marmalade. In fact, the earliest recipe for bitter orange marmalade dates back to 1677! We guess that good things do last forever.

Marmalade made in the EU

Bangs’ bitter orange marmalade is produced in the EU with a high content of juicy Spanish bitter oranges. It contains no artificial preservatives, only naturally preserving sugar to give it an authentic, natural taste. It will stay fresh for 18 months from production date before opening, and once opened, you can store it refrigerated at 5 ºC for 2 weeks.